Tour to pyramids Saqqara and Dahshur

Full-day Egyptian Pyramids Tours include all major Pyramids in Egypt, the three Pyramids, and sphinx, Saqqara pyramid of Djoser, Red and Bent Pyramids in Dahshur and Memphis city, tour available every day.

Pickup: from your hotel.

Morning at 8.30 am  meet our tour guide in your hotel Start your full-day tour to visit

The great Pyramids of Giza

The Seven Wonders of the World The Three Pyramids, the Big one is the Khufu pyramid, and khafre pyramid the second one, and Menkaure Pyramid the third, which are guarded by the mysterious Sphinx statues.

Sphinx is a statue of a mythical creature with the body of a lion and a human head. It was carved from limestone, believed to be ancient by the Egyptians in the reign of Pharaoh Khafre 2558-2532 BC

The afternoon will drive to Saqqara is one section of the great necropolis of Memphis.

built by Djoser king in 2700 BC. Saqqara is considered the oldest and first pyramid in the world, it looks like a stepped pyramid.

Afternoon drives to “Dahshur” visit the Red Pyramid, which is one of the pyramids of Egypt and one of three pyramids built by the Pharaoh “Sinfero” King.

In the Same area will visit Bent Pyramids

The Pyramid of Sneferu is an ancient Egyptian pyramid located in the possession of the tomb of Dahshur, approximately 40 kilometers south of Cairo, which was built under the ancient kingdom of Pharaoh Sneferu (c. 2600 BC). A unique example of the early development of the pyramid in Egypt was the second pyramid built by Sneferu. 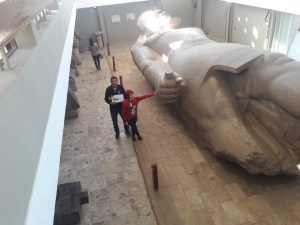 is the capital of the ancient kingdom, you will see the big statues of Ramses II.

it was one of the most important cities throughout the History of ancient Egypt.

Later transfer back to your hotel.

Tour to Alexandria From Cairo by private tour