What is the Baron Palace and its importance? The Baron’s Palace is among the great monuments inside Egypt, which is characterized by its distinctive decorations. Where we note that it was built in a distinctive way that made the sun not set on it all day long. This palace is located in Cairo specifically within the Heliopolis area on Al-Orouba Street, which extends on the airport road in Cairo.

Who is the Baron?

He is an engineer, a businessman, and the founder of many projects at one time. He was born on September 20, 1852. He was awarded the title of Baron in 1907, and his goal was to build this building to live and settle inside it because of his love for Egypt, and its monuments.

The Baron noticed the area on which the Baron Palace was built through one of the art galleries in Paris. He liked the place, and decided to build his own palace, and to reconstruct the area next to it. Where we find that the Baron Palace was built in 1903 with the help of the engineer Alexandre Marcel. And who was interested in erecting a building that includes the Indian style, and this is the Baron’s gift to the Indian peoples who helped him when he was sick, and helped him quickly. As we explained in the introduction that the Baron Palace does not set the sun, and this is because of the many openings that are represented in the balconies. And the distinctive shaped air holes located in all directions of the palace. The Baron Palace was built on an area of ​​​​12.5 thousand square meters, characterized by a special interior design. The palace was decorated with modern decorations related to the Renaissance in Europe, while the interior design was one of the decorations of the Hindu civilization. The palace’s external balconies were built using some elephants that are indicative of Indian heritage. Where she moves with her when the balconies move, in addition to noticing the spread of ivory outside and inside the palace. We find that the palace floors were made using marble and alabaster materials that were imported from Italy and Belgium. Inside the palace we find many statues that were made of many metals such as gold, bronze, in addition to platinum. The palace consists of two floors, a basement, and a private rooftop for the palace. In addition to the tower on the left side of the palace, we will explain the features of each of the previous places. 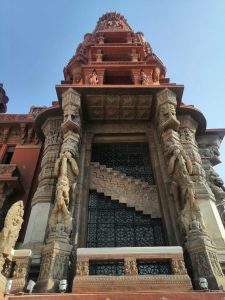 The first floor is characterized by containing a spacious hall with a large and elegant area, with three additional rooms. Where we find in the first room was designed specifically for guests, while the second room is known as the table room in which they eat their own food. As for the third room, it was designed so that the baron could play billiards. If we describe the staircase that leads to the second floor, we find that it is characterized by containing many Indian-style statues, designed with precision, and in a distinctive way that fascinates others.

on this floor we find that it contains the main rooms of the owners of the palace are the baron. And his family, which consists of four rooms, each room has its own balcony, in addition to the fact that the area of ​​each room is very large. The floor of the rooms is characterized as parquet in comparison. The bathroom floor is made of mosaic of many colors. Each room has its own balcony with seating on each side. In addition, it was decorated with some distinctive and unique statues.

The roof of the palace

The roof of the baron is characterized by the fact that it has a very large area that enables the baron to hold his own parties. Where we can climb to it using a ladder made of luxurious rosewood material. The baron liked to go up to the roof at dusk so that he could calmly drink his cup of tea. It was also found that the walls of the roof were decorated in the form of drawings of some mythical creatures, and others of some animals and plants.

has many areas, including a special corner for the car park for visitors and the baron. The places in which the servants reside, the marble washroom, in addition to the room for preparing food for the Baron and his family. The dining hall is connected to the basement by an elevator made of walnut wood.

as the residents near the palace felt many voices. Which includes hearing the sound of baggage moving from one room to another, even though the palace is devoid of humankind. Some said that the spirit of his sister is the reason for the appearance of these ghosts, as she died by suicide from the balcony of her own room, and this is what we will explain to you in our article. Some saw that there were many lights suddenly turned on inside the palace in addition to the fact that the lights were switched off by themselves. There is also a scene that happened in the palace that made the citizens make sure that there are ghosts inside the palace. He is when he notices some smoke coming from the baron’s room to the balcony of the tower. Then there were some flames but suddenly all the flames were put out without human intervention. We find that these ghosts appear during the night times so everything works to get rid of anyone inside the palace in the middle of the night.

April 2, 2022 No Comments Cairo attractions
Previous Post
The Madrasa of Sultan Hasan
Next Post
how many pyramids in egypt ?

Things to do in Luxor

No comments to show.